DANVILLE, VA (May 3, 2017) – Hunt-Sellers Racing announces today that the team will be fielding the No. 18 Toyota Camry for the NASCAR K&N Pro Series East Who’sYourDriver.org Twin 100’s at South Boston Speedway with driver Peyton Sellers on Saturday, May 6. 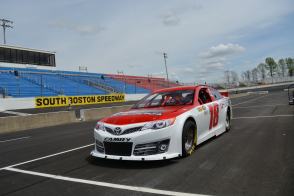 The weekend’s races will be the first event for the series at the track since 2011, and Sellers is looking forward to being a part of it. He has a lot of history at South Boston Speedway in various forms of stock car racing including the NASCAR Whelen All-American Series, the NASCAR K&N Pro Series East, and the ARCA Racing Series.

“I’m really looking forward to getting back into the K&N Pro Series,” said Sellers who will be making his first K&N East start since Dover in 2015. “I’ve had a lot of success here and look forward to competing here at my home track in front of my hometown crowd.”

Sellers has two previous K&N Pro Series East starts at the track which brought a lot of success in those two events. In 2007, he started on the pole for the South Boston 150 and finished in second place just ahead of current Monster Energy NASCAR Cup Series driver Joey Logano. In the 2008 Strutmasters.com 150, Sellers started 11th and moved up through the field to finish in the third position.

Not only has Sellers had incredible success in the K&N East Series at South Boston, but he is also one of the most well-known NASCAR Whelen All-American Series (NWAAS) drivers in the nation. In 2005, he was crowned the NWAAS National Champion, the youngest National Champion in NASCAR history. In 2013 and 2014, he was deemed the Virginia Triple Crown Champion which is given to the driver with the best finishes in all three triple-crown races. In 2014, Sellers received the trophy for the South Boston Speedway track championship.

During the off-season previous to the 2017 season, South Boston Speedway underwent a repave, but that doesn’t stop Sellers from excelling at the track. Only four races into the South Boston Speedway season and Sellers already has a win under his belt on the new track surface which will give him the upper hand going into Saturday’s Twin 100’s; however, he knows the K&N veterans are tough to beat.

“I think we can have a really strong run there this weekend. I’m pretty familiar with the new track surface, and I think it gives us a bit of an advantage going into the weekend. However, running this weekend’s races with the guys that run this series week in and week out, you know, the veterans, they are going to be tough,” Sellers said.

“I’m looking forward to working with Ron. He’s a great guy to work with and we are excited to get to South Boston to see what we can do. I can’t thank him, Michael and Sam Hunt, HC [Sellers] and the rest of my guys for working on our car and getting it ready for our hometown race.”

About Hunt-Sellers Racing: Hunt-Sellers Racing is a NASCAR K&N East Series competing team owned and operated by Sam Hunt and Peyton Sellers. Sam Hunt is a long-time K&N East\ competing driver who made his series debut in 2012. Peyton Sellers is a legendary NASCAR Whelen All-American Series driver who is well-known in the state of Virginia and surrounding local-tracks. Sellers has also competed in K&N East, NASCAR Xfinity Series, and much more.